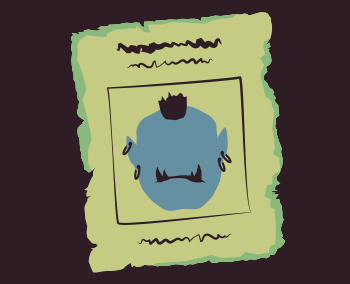 Orc names are reflective of their native language and outwardly aggressive behavior. Typically they are monosyllabic with throaty or guttural pronunciations. Male names rely on heavy consonants, while females tend to use slightly softer vowel sounds.

Orcs are one of the more recent races to emerge from the various humanoids that inhabit Toril. Many believe they were born from elves burned and disfigured by the blood of Gruumish, the Ruiner, when Corellon pierced his eye during a great battle. Orcs have terrorized their surroundings, particularly Faerûn, for as long as any can remember. Since their beginnings, other races have feared orcs as mindless abominations enticed by the darkness of slaughter.

Elders tell stories of the Ruiner’s blood that flows in the veins of all orcs and how it drives them to commit all manner of terrible, violent acts. The orcs call this behavior hgar’Gruum, or the curse of ruin, and use the term to describe all types of unhealthy behavior from battle rage to a terrible temper. However, this poor perception began to shift in the years that followed the Spellplage, when King Obould Many-Arrows unified a mountain orc horde into a singular, distinctly civilized kingdom.

This change in perception is not to say that orcs do not feel a particular attraction toward violence and anger. However, the stories surrounding the curse of ruin is more likely a fable passed down through generations. There is no supernatural or divine power driving orcs to kill. Instead, they are unfortunate victims of the same selfish and violent impulses that plague all mortal beings.

As victims of these base impulses, most orcs are easily offended, impatient, and seek more violent solutions to problems instead of considering alternative options. Despite the single-mindedness, their direct, more brutish approach has earned a reputation for getting excellent results. Though, certain orcs, like King Obould, are a stand-out exception. Rather than violence, he accomplished many great deeds through planning, insight, and relative diplomacy.

Orcish appearance does vary depending on region and subrace, though all share particular physical characteristics. Typically, they have a grayish skin tone, coarse dark hair, bowed posture, pronounced foreheads, large muscular builds, and porcine faces featuring lower canine teeth that resembled boar tusks. Many also share similar wolf-like or pointed ears to that of the elves. Beyond these differences, orcs are roughly the same size as humans and other similar humanoids.

Where do orcs live?

Despite the renown of King Obould, orcs rarely built cities of their own. Alternatively, they often inhabited places left behind by others, operating out of makeshift camps or dens and sometimes living within the surrounding natural caves. They are capable of the iron and stonework necessary to build a city, but their tools are often inferior to the more proficient and disciplined races.

Most orcs see war and battle as a means for survival. If a suitable uninhabited space is unavailable, many will seek to subjugate other cultures or enemies as a way to obtain land and resources. This practice is a guiding principle of Gruumish and his pantheon, who believe all races are beneath the orcs.

Orcish societies are often savagely patriarchal, leaving their females as prized possessions at best and only slightly better than livestock at worst. Along with scars from battle, the number of wives and sons stands as a status symbol for male orcs. Slaves were also sought after, though relatively few had the patience to own and look after them.