Pluck of a Harp (Plucker) 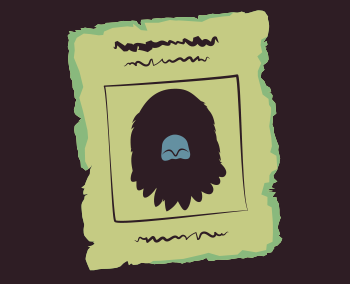 Using their ability to duplicate sounds, Kenku draw their names from a tremendous assortment of noises and phrases. Instead of reproducing these chosen sounds, other races often used descriptors like Smasher, Whistler, or Hammerer. Kenku thugs, warriors, and brutes often adopt noises made by weapons and battle. Thieves and con artists use clever animal sounds that allow them to stay hidden from their foes. Non-adventurers take on the noises of their chosen craft, like fluttering sails or the clanging of a hammer.

Although many believe that they evolved from avians due to their appearance, kenku do not have wings or the ability to fly. Beyond this, they maintain raven features with bird-like talons for hands and feet, black and beady eyes, and a long dark-hued beak. Soft umber and ebony feathers cover their head and torso, while their thin limbs are bare and scaled like most birds. Though their particular skills can make them valuable allies to some, Kenku suffer from a sinister and deserving reputation brought on by an ancient crime that stripped them of many things.

Kenku were once subservient to an almighty and mysterious entity on a separate plane of existence. Scholars believe they were minions of Grazz’t, a powerful demon lord, while others say they were simple scouts and explorers for the Wind Dukes of Aaqa. Regardless of the truth, legend tells of the kenku’s betrayal of their master. Unable to resist the lure of a particular treasure, they plotted to steal the item and flee to the Material Plane.

Despite the kenku’s efforts, their master discovered their plan before they could enact it. Enraged by the disloyalty of his servants, the entity imposed three terrible curses upon the kenku. They dissolved the kenku’s beloved wings as punishment for their intended escape, removed the spark of creativity from their souls as penance for their scheming, and took away their voice to keep them from divulging their secrets. Once the entity was satisfied, they banished the kenku to their intended place of refuge, the Material Plane.

Where do kenku live?

Since their arrival, kenku have endlessly roamed the world. Led by experienced elders, they gather in flocks, settling only in places indifferent towards their sordid history. Typically this forces them to take residence in forlorn impoverished cities overrun with violence and crime.

Though they may lack creative thinking, Kenku rely heavily on their talent for learning and memorizing details. Their extraordinary memory makes them excellent spies and scouts, giving them access to the clever schemes and plans of other creatures they can later use as their own. While they are incapable of improvising, kenku often compensate by utilizing multiple previously acquired plans to accomplish a singular goal.

Kenku make an easy living using their talents working for thieves’ guilds, bandits, and other criminal organizations. A flock or network of kenku can covertly relay all manner of noises across the city, warning allies of an approaching guard, signaling the precise time to attack, or communicating which mark has the best goods. The precision of their sound reproduction allows for clear and concise messages without degradation or shifts in meaning—a skill other races can rarely reproduce.