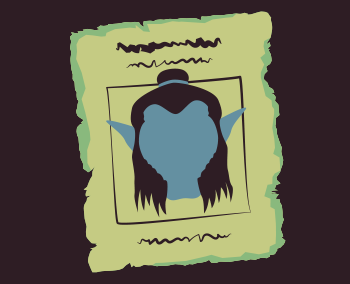 Much like other goblinoid races, hobgoblin names originate from the heavy guttural sounds of their native tongue. Though not typical, some hobgoblins take a family or tribal name to reinforce their superiority over their kin or appear more civilized and intelligent to other races. Others may earn an imposing or gruesome title that speaks of their fierceness in battle or recalls a particularly devastating weapon of choice.

Hobgoblins are among those at the top of the goblinoid social structure. They may not be as strong as a bugbear, but they readily make up for their shortcomings with durability, intelligence, and savagery. The glory of battle and the brutality of war is an all-consuming obsession for most hobgoblins. It is not the horrors of combat that haunt their nightmares but the gut-wrench of cowardice. Hobgoblins believe those who die in battle carry their deeds of glory with them into the afterlife, becoming eternal heroes.

This desire for might and conquest requires hobgoblins to hold themselves to incredibly high military standards. Many start soldiering from the moment they can walk and wield a weapon capably. Tribal elders record and retell militaristic traditions to younger generations in hopes of nurturing their thirst for conflict. Even those who cannot reliably fight contribute to the war efforts through farming, building, and practicing the arcane arts.

The deep-rooted philosophy of hobgoblins often blinds them to the achievements and successes of other races. They have little understanding or patience for art and associate true beauty with violent images of conflict and warfare. While other peoples may hope to find time for joy and leisure, hobgoblins relish unleashing unbridled fury upon their foes.

Where do hobgoblins live?

Hobgoblins typically form communities away from non-goblinoid cities where they command goblins, bugbears, or some combination of both. Groups organized and led by hobgoblins are often more civilized than those guided by their kin. This perception is mainly due to their more industrious and less savage nature when compared to goblins or bugbears. Alternate tribes dominated by the raw strength of bugbears appear throughout Toril. However, the most fearsome and prolific communities find leadership in the strongest hobgoblin.

As the war chief, the tribe’s reputation and military status are of vital importance. Hobgoblins will not hesitate to turn on others during a meeting if denied proper respect or protocol—even if it is an ally. However, despite their territorial and self-important behavior, they are not against uniting with other tribes to pursue a common goal. It is not unusual for hobgoblins to hold a truce between tribes, joining forces to wage war against non-goblinoids.

When they are not at war, hobgoblins often practice a long-held tradition of mastering and breeding creatures into servitude. Early hobgoblins raised many of the first drake breeds. Although, those who continue the custom today tend to prefer more manageable animals like wolves or worgs. Certain scholars believe the same traditions are practiced on other hobgoblins, creating various mutations of the goblinoid bloodline intended to bolster the strength of the tribe.