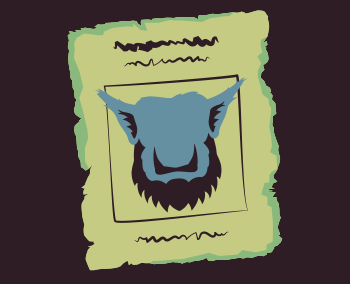 Like most goblinoids, bugbear names come from a dialect of the goblin language. These guttural and abrasive monikers carry dark and twisted meanings that mirror the bugbear's legendary savagery. Most do not have family names, though a rare few may take pseudonyms given to them by their familial groups or gangs.

Large and hairy beasts that creep through shadows like wild cats, bugbears permeate the nightmarish tales of many other races. Campfire stories warn that they hunt and strangle men and women who walk alone in the woods. Parents teach disobedient children that bugbears will devour any who stray too far from their homes. Soldiers believe bugbears can trap the soul of a dismembered head and command the fallen's loved ones using dark magic.

Like many great myths, these terrifying tales come from a certain amount of relative truth. Though not as agile as a predatory wild cat, bugbears rely on their significant strength and prefer to operate during the night. They are unlikely to attack lost travelers or wandering children unless they can obtain something valuable or specific. Bugbears may take the head of a rival leader during battle, but it is not for magical purposes. Instead, they present the head as an offering to the gods or carry them on pikes to instill fear and intimidate their enemies. However, though they are vicious and brutal, their rarity and natural lethargy limit the number of violent encounters with the rest of the world.

Bugbears often rest or slumber around their gangs when not engaged in combat. Their barbaric nature is not conducive to the life of a farmer, crafter, or producer of valuable goods. They are far more comfortable bullying weaker creatures into doing such tasks while they relax. So adverse to work, most bugbears will flee from any superior authority attempting to force them into service. Even those who become subsumed into goblinoid armies are forced awake or bribed to perform their duties properly.

Still, this lazy behavior should not be confused with weakness. Bugbears are capable, ferocious beings who use their powerful bodies to exact swift and terrible violence upon their foes. As mobile masses of muscle and fury, most bugbears cannot sustain long periods of effort. They are ambush predators accustomed to extended periods of inactivity disrupted by short bursts of destructive energy.

Where do bugbears live?

Due to their particularly low productivity, the population of the bugbear race is limited, and they remain scattered throughout the lands in small family groups that operate like gangs. These groups typically consist of less than a dozen members, including siblings and their mates, a handful of offspring, and an elder or two. Bugbear gangs live in or around a small enclosure like a cave or an abandoned bear den, with additional shelters within their territory sometimes used during an extended hunting period.

Though sentient and violent beings, bugbears have little more impact on the world than most savage wild beasts. If left alone, they continue with their meager lives crafting simple tools and hunting and gathering food. Many gangs even conduct rudimentary peaceful commerce to exchange members and goods between them.