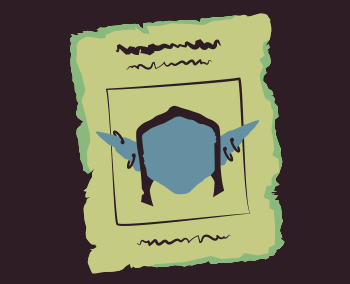 Guttural and rasping, the goblin tongue is heavy with grunting and whimpering noises and spoken in a rasping or growling manner. Goblin names follow a similar phonetic pattern containing complex consonant sounds often difficult for other races to pronounce. First names are typically two syllables or less, and it is rare for goblins to carry a family or tribe name.

As one of the smallest and often-abused goblinoid races, goblins occupy an uneasy and tumultuous station within a dangerous world. They are painfully aware of their weak and unsophisticated nature and how easily they become dominated by stronger, more intelligent, better organized, and more magical creatures. Goblin’s lives are violent, unstable, and short. It is this unfortunate and nagging reality that drives them to seek control over others whenever possible.

Their obsession with power frequently leads to the trapping and subjugation of other weaker creatures they encounter. Goblins often employ pit traps, snares, and nets for miles around their lairs in hopes of catching the unprepared. Tribes that discover non-goblinoid cultures may test the waters by stealing various objects, and if unpunished, begin abducting residents. Even hunting parties look for ways to capture their foes rather than kill them.

Those unfortunate enough to be captured receive the worst possible treatment that still allows for the adequate performance of each slave. A cruel form of vengeful retaliation against the brutal lives forced upon many goblins. Even captives with practical skills become little more than abused pets.

Despite the most valuable creatures being humanoid, goblins bully all types of creatures into servitude. Among other smaller animals, rats and wolves are commonly present among goblin tribes and perform similar tasks to those dogs and horses may carry out for humans.

Where do goblins live?

Goblins are common throughout Toril and often live in shallow caverns away from non-goblinoid cultures. Their tribes make use of a strict four-tiered caste system that includes lashers, hunters, gatherers, and pariahs. A family’s status depends upon their contribution to the tribe’s survival, and their knowledge and skills become fiercely guarded secrets. Unfortunately, this provides little hope to those who find themselves among the lower classes looking to escape their station.

Outsiders are often surprised by the stark contrast in which the different castes interact with the world. An individual human fighter may be able to frighten away a dozen or more pariahs, but two hunters may stand their ground and fight to the death. A captured group of goblin foes might hang in a net while dozens of lashers pass by without the slightest interest. Instead, the soon-to-be-slaves stay swinging in the wind until the gatherers come to collect them.

Goblins love symbols of authority, and the castes adopt various versions to indicated membership, kinship, or even the absolute power of the tribal boss. Examples vary from typical crowns and thrones to extravagant wolf saddles and colorful articles of clothing. Items vary wildly between castes, and rarely if ever, are the symbols the same between different tribes. Regardless of what may appear absurd to outsiders, symbols are sacred among the goblins who honor them.