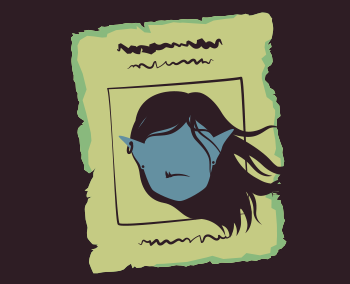 As the name would suggest, elf-orcs (sometimes called uniya) are the progeny of the two humanoid races that provide their namesake. However, unlike the more well-known half-breeds, half-elves and half-orcs, elf-orcs do not have a human parent. They are instead the unlikely result of an elf and orc relationship.

Elf-orcs are extremely rare in the world, as the coupling of their parents is still relatively taboo within their cultures. Elves and orcs have had a mutual loathing for thousands of years, stemming from the orcish god Gruumsh's vow to destroy all other humanoid races. Countless wars have pitted elves against orcs, and while they may have brokered a tentative peace in the modern-day, an underlying hostility remains. Gruumsh and his followers still seek vengeance for the supposed trespasses against him, and the extended lives of the elves have allowed them to keep memories of their losses fresh in their minds.

There are extreme situations where an elf and orc could create a child. We choose not to glorify those things here, but a gaming group willing to navigate such topics could pursue that direction. In that instance, we advise speaking with your game master and the wider group to make sure everyone is comfortable at the table. As a safer alternative, a player could choose the route of forbidden love, like Romeo and Juliet. Two star-crossed lovers whose child represents the good in the world and the potential peace between warring races.

The name of an elf-orc is often fluid in its origins but generally takes from either of the elven or orcish naming traditions. First names of both races are usually a unique creation derived from their respective native languages. However, while orcish first names typically have no definitive meaning in the orc language, elvish names may honor family members or highly respected individuals.

Secondary names are a more complicated matter. Orcs do not typically take surnames, although their tribemates may create a descriptive moniker that expresses a specific characteristic. On the other hand, Elves have a family name tradition that combines the elvish words for things like gold or silver with nouns like petal or brook. The parents of an elf-orc may decide to provide their child with any combination of these names, though an epithet is still generally provided by their community. It is also not uncommon for an adult elf-orc to change these names depending on their social influences or affinity for a specific part of their lineage.

Unfortunately, elf-orcs suffer similar prejudices as other bi-racial humanoids. Rather than endure the disdain from their native communities, many live among humans or within large cities where the residents are more accepting or indifferent of their heritage. Those with elvish features tend to have an easier time among other races, as many see elves as respectable and good-natured. However, elf-orcs with strong orcish characteristics may struggle considerably more in society, as many races still fear those with orcish blood.