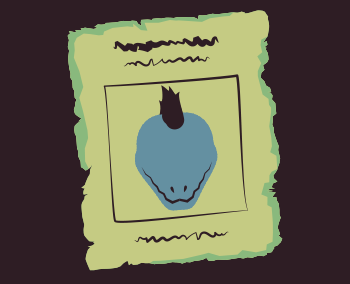 Draconic in origin and gender-fluid, lizardfolk names are typically descriptive terms given to them by their tribe that represent an individual’s notable deeds or actions. For example, elders may grant the draconic word for “spear” or “dagger” to a lizardfolk who defeated and claimed the weapon of a great foe. Another who hides among the muck while hunting might be called “grey” for their choice of camouflage.

It would be foolish to assume that lizardfolk are little more than scaly humanoids. Despite their physical appearance, lizardfolk have more in common with iguanas or dragonkin than with races like dwarves, elves, or humans. Lizardfolk have an unusual and peculiar mindset, with thoughts and desires driven by basic primal instincts and simplistic principles. They experience emotions in a much more limited manner than other humanoids, with feelings that closely revolve around fear, aggression, and pleasure.

Lizardfolk view emotions as characteristics assigned to other creatures, objects, or situations. A human confronted by a dragon may experience fear in a more typical or expected manner. Their limbs may shake, their thoughts might become jumbled and incoherent, and their reactions may be sudden and erratic. As in most creatures, fear takes control of their behavior and actions. In contrast, a lizardfolk does not register the experience as being scared. Instead, threatening, more powerful creatures manifest in lizardfolk’s minds as formidable beings that they should avoid if at all possible. If they encounter such a creature that decides to attack, lizardfolk retreat, only fighting if forced to do so. Lizardfolk are not fearful of a dragon; they realize that a dragon is a terrible and dangerous creature and react accordingly.

Similar to fear, lizardfolk never exhibit anger in the same way others do. Rather than feeling rage, lizardfolk act with targeted aggression, only starting a fight with a creature they are confident they could defeat and cannot deal with some other way. Their use of this behavior is more primal and animalistic, becoming aggressive towards prey they wish to eat or creatures that want to harm them.

Where do lizardfolk live?

Similar to other cold-blooded creatures, lizardfolk typically inhabit the more temperate and warm regions of Faerûn. The majority of their kin live within marshes or swamps in well-hidden lairs. However, about a third of the lizardfolk population have made dwellings in underwater caves where natural air pockets have developed.

As a predatory race by nature, Lizardfolk do not have farming, cultivation, or animal raising traditions. Instead, they acquire their food through hunting, fishing, scavenging, or stealing from others. When lizardfolk feel threatened or food sources become scarce, their tribe will do absolutely anything to survive. Some may raid nearby humanoids for food, supplies, and even slaves, while more desperate tribes may commit gruesome acts of violence.

While most lizardfolk are content to live their lives among the wetlands where they were born, a rare few choose to venture beyond the land of their tribe. Some seek to hunt more dangerous prey, while others journey to discover unique knowledge they can bring back to their tribes. Regardless of the reason, lizardfolk rarely travel alone. They fear that without their kin to remind them of who they are, lone lizardfolk might lose their identity, become corrupted by the ways of civilization, and never return to their home.