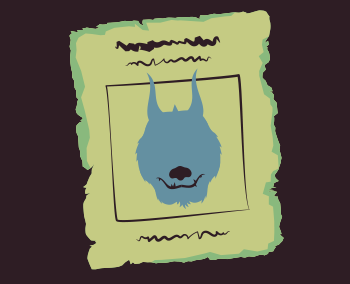 Kobolds take their names from the Yipyak language, an archaic derivative of draconic that some liken to the sound of yapping dogs. Though they gather in tight-knit tribes, they do not usually take a familial or last name. Their first names are typically short, rarely longer than two syllables, with hard consonants and open vowels.

Kobolds believe Tiamat created them using the blood of dragons, and their similarly draconic appearance is difficult to refute. Kobold elders have boastfully retold this legend of creation to their hatchlings for generations. While their race is adverse to confrontation and limited in strength, kobolds know there is greatness within them. They are proud to have been chosen to be the blood-kin of dragons.

Still, despite their supposed grand origins, many other cultures dismiss kobolds as cowardly, senseless, and weak. However, these diminutive reptilian creatures find their strength in numbers with a solid social structure that stresses devotion to their tribe. Kobolds are quick and skillful with their hands and fiercely work together to overcome their physical and mental limitations.

In a perfect world, kobolds envision a peaceful land of seclusion where they can dig their endless tunnels, raise the next generation without fear, and worship their god without persecution or judgment. Unfortunately for them, the real world is a much more harsh and dreadful existence. Kobolds are frequently bullied and enslaved by sinister, more threatening creatures. Even during times of respite, fear of impending invasion and oppression plague their minds. However, their proud nature drives them to persevere. Kobolds are dangerous when cornered, fierce when defending their eggs and family, and infamous for the perilous improvised traps they use to protect their warrens.

Where do kobolds live?

As cold-blooded creatures, Kobolds prefer temperate or tropical climates. However, there are smaller tribes that take residence in colder regions as well. These kobolds tend to be more aggressive in their hunting and behavior, as food is far more scarce.

Though they are partial to any terrain that allows for tunneling, the kobolds’ timid nature and sensitivity to sunlight drive them to seek the security of cave-living instead of the open air. It is rare to find kobolds in swamplands or near the coastline due to the problems such soft ground can cause for digging. Dense woods, hills, or large rock outcroppings provide more comfortable warrens above the natural water lines.

These areas tend to have natural caves, plentiful food sources, and plenty of room to dig. Although, they also put kobolds in competition with a myriad of other surface-dwelling creatures. Kobolds’ natural ability to avoid detection often allows them to hide their warrens, but eventual interaction is nearly unavoidable. Some less-violent humanoids may see a mutually beneficial opportunity. The larger creatures may provide protection or gather more challenging resources, while the smaller kobolds might excavate new living spaces or perform more menial tasks like removing refuse. Although, not all tribes are this lucky. Evil beings often force kobold tribes into slavery or remove them from existence altogether.