Where do the Shou come from?

The Shou were an ethnic group of humans originating from Shou Lung, formally one of the most powerful nations on Toril. Growing from the peasant nation of Nung Fu, Shou Lung expanded among the eastern lands of Kara-Tur, a large continent to the east of Faerûn. Hundreds of miles between these two landmasses stretched the Hordelands. An area once part of the mighty Imaskar Empire, which is now uncultivated land ruled by various nomadic, warring tribes.

Despite the land's reputation, the Shou helped develop a path through the Hordelands called the Golden Way. An undocumented route to Faerûn and surrounding nations established by using marker stones rather than a formal road. The creation and use of the Golden Way allowed the Shou to build a strong trade relationship with the people of Faerûn.

Around 1360 DR, the success of these trade agreements gave way to the eventual migration of many Shou people to Thesk and other lands within Faerûn. Phsant, Telflamm, Marsember, and Westgate were all cities with a notably large community of Shou. However, after the Spelllague of 1385 DR, a formal Shou nation of Nathlan was founded along the Dragon Coast.

Though the goodwill between the peoples of Kara-Tur and Faerûn remained, tribes from the Hordelands continued to raid the northern provinces of Shou Lung. In response, the Shou constructed a vast barrier of stone between the continents called the Dragonwall. According to legend, the emperor tasked a group of wu jen (official Shou practitioners of magic) with finding a way to stop the raiding parties of the Tuigan horde. In response, the mages stole a powerful jade mirror from the sea dragon Pao Hu Jen, whose body stretched thousands of kilometers long, and proceeded to lead him on a chase along the nation's border. When his nose nearly touched the sea, the wu jen stopped and held the jade mirror to the dragon's eyes, instantly turning him to stone. It was from these petrified remains that the emperor built his immense defensive wall.

What makes the Shou unique?

The Shou had golden-bronzed skin, broad, flattened features, and dark eyes and hair. Traditionally, the men would shave the top of their heads and braid the sides and back. Shou clothing was modest, long, loose shaped, and often in bright colors. Though yellows, reds, and purples held special or royal significance.

The Shou people practiced two primary forms of religion, the Path of Enlightenment and The Way. The majority of people in Shou Lung practiced the former, which worshiped the Celestial Emperor, the Nine Travelers, or Great Dragons, and the large pantheon of gods, spirits, dragons, and lesser immortals that made up the Celestial Bureaucracy. Followers of the Path of Enlighlightenment differ from eastern philosophy. The people of Faerûn, may believe in the realm of gods but devote their worship to a specific deity. In contrast, Enlightenment followers often worship several if not all of those who are a part of the Bureaucracy. The Way strayed even further from typical western religious beliefs, existing as more of a philosophy of ethics than a formal, organized practice. Rather than focusing on gods, spirits, or the metaphysical world, The Way focused on enlightenment through practiced spiritual exercises. 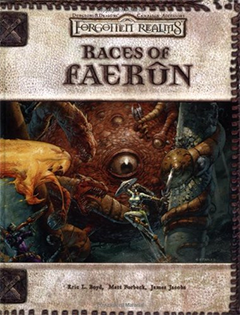 Search the Races of Faerûn