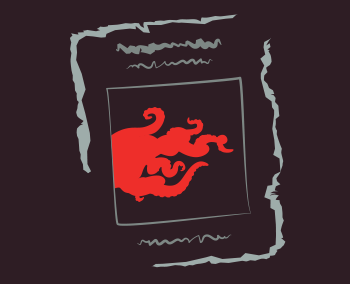 Similar in physicality to squids or other cephalopods, krakens are immense otherworldly creatures that dwell deep within the oceans. Ten enormous tentacles surround their conical bodies, with two that grow longer and sprout lethal natural barbs to act as their primary appendages. Their jagged beaked mouths emerge from the center of their bodies framed by unsettlingly large eyes, all surrounded by protruding fins and elongated barbels.

Though many historians believe gods created krakens to serve as their protectors and warriors, their precise origins are unknown. Slarkrethel, a well-known ancient kraken who once served as Umberlee's chosen, was thought to have come into existence in 151 DR. However, many believe krakens existed even before the Thousand Year War, a great conflict between dragon kind and the giant nation of Ostoria that began tens of thousands of years before Slarkrethel's existence, around -25,000 DR.

Regardless of the exact details, krakens have existed within the lightless depths of the oceans for untold ages, plotting their ascension to the level of godhood. The lives of mortals are of little consequence to the grand schemes of krakens, most deeming interactions with any lesser race largely insignificant. This scarcity of sightings has caused most water-born and land-dwelling races alike to forget the power and destruction caused by the tentacled horrors of the deep. Many races dismiss the ancient stories as little more than legend or the righteous acts of the gods.

Where do krakens live?

Though kraken tentacles have emerged from countless seas across Toril, the creature's immense size and tendency toward isolation and concealment often relegate them to the deepest, darkest areas of the oceans. However, while the dark aspirations of a kraken rarely focus on lesser beings, it does not mean they are exempt from indiscriminate destruction.

Krakens are primeval forces that can decimate even the greatest of civilization's achievements with remarkable ease. Nations justly shake with fear at the sight of a kraken emerging from its dark depths, dragging along roiling storms that bend to the will of its innate arcane abilities. Few things can stop a Kraken from destroying trade routes, halting seaside communications, and laying waste to coastal cities.

Fleets of galleons and warships disintegrate among massive thrashing tentacles uncoiling from the depths. Their masts snap like kindling before the kraken's huge barbed appendages crash down from above. Each strike sinks ship and crew alike among the cloud of inky poison that seeps from the creature below.

These heinous and unimaginably violent acts have caused some to offer tribute and worship krakens as gods. Some follow in the hopes of avoiding future brutality, while others long for twisted salvation among the creature's warped vision for the future. Cults and minions ooze from the coastal towns, worming into land-bound civilizations and spreading the dark gospel. However, not all krakens are without momentary mercy despite their evil intentions. If satisfied with the progress of their worshipers, they may use their arcane abilities to provide protection to an allied port, quell a particularly rough storm, or provide a generous harvest of fish. Though, all who encounter a kraken would do well to remember that their true intentions are the ruination of all things.