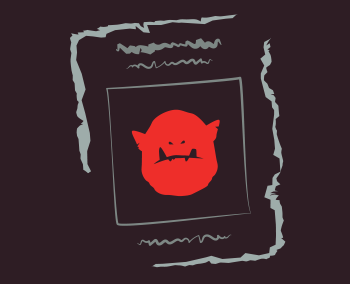 Hulking giants known for quick tempers, ogres will lash out in frustrated outbursts until no objects or creatures are left to demolish. However, they are just as lazy and foolish as strong, preferring to raid and scavenge rather than toil away in fields or work for a living. It may only be their lack of intelligence that keeps them from becoming a greater menace.

Notorious for their foul disposition, an ogre's temper flares at even the slighted perceived offense. Petty insults and name-calling will instantly awaken an ogre's wrath. Then again, so would stealing from it, bumping, jabbing, or prodding it, laughing near it, making any unusual face, or simply looking at it the "wrong way." Generally speaking, it's just best to avoid an ogre, lest you find yourself little more than a puddle beneath its fists.

The only thing an ogre loves more than chasing down dwarves, halflings, and elves is the taste of their meat and the crunch of their bones. Suppose any of the unfortunate prey remains after an ogre finishes its gorging. In that case, it may entertain itself by making a loincloth from unconsumed skin or a neckless from discarded bones. Though macabre and detestable, this is the height of ogre culture.

Ogres are simple creatures who covet the possessions of others. They often carry rough sacks on raids to fill with the fantastic treasures taken from their victims. However, their perception of value may not be the same as other more intelligent humanoids. They may seize smashed helmets, moldy cheese wheels, tattered animal furs, or even a squealing, muddy hog. Still, while they may not understand the value of gold and silver, they delight in its glimmer and will fight for even a small handful of coins.

Ogres lack the intelligence to speak eloquently. Most only know a rudimentary form of Giant, let alone many words in common. It is even rare for an ogre to count to ten, despite having the assistance of their fingers. They are easy to fool and desperately gullible but will not hesitate to break—or eat—things they do not understand.

Where do ogres live?

Ogres crudely clothe themselves in the skins of animals and uproot trees to craft rudimentary tools and weapons. Though they lack intelligence, they are keen enough to create stone-tipped spears and seek favorable settling areas. When searching for a den, ogres typically live among the rural edges of civilized lands, where they can take advantage of exposed storehouses, poorly protected livestock, and negligent farmers. They may sleep in caves or abandoned animal dens until they can find suitable lodging, moving on only when they have depleted their food supply.

Lacking a genuine concept of community, ogres do not typically come together to form clans or tribes. Instead, they sometimes band together into small nomadic groups. These roving bands occasionally clash, battling over territory, resources, or in an attempt to add to their ranks. However, some interactions are more like small trading agreements that freely exchange goods and members as needed.

When venturing out alone, it is common to see ogres gang up with other monsters like goblinoids, orcs, and trolls to terrorize and victimize weak and unfortunate creatures. Ogres are also a part of the complex social structure of the giants, called the ordning. Ranking among the lowest of the giant kin, ogres will gladly do anything requested of them by other giants in the hopes of gaining favor with Annam All-Father.